Many of the 650+ developments under Greenbelt’s stewardship UK-wide contain structure belts and woodland buffers – typically long, thin strips comprised of carefully-chosen shrubs, trees or both.

In addition to serving as pockets of colour, animal habitats or physical boundaries, such components also work as visual and aural screening – affording privacy to nearby homes, or muffling the ambient traffic noise of adjacent roadways.

The species present in these buffer zones are chosen especially for this purpose, with many also serving to purify the local air quality by efficiently filtering out airborne pollutants.

In fact, last month the Royal Horticultural Society highlighted the large, bushy shrub Contoneaster as particularly effective in absorbing roadside emissions, locking in chemicals and preventing them from spreading further around the wider vicinity. 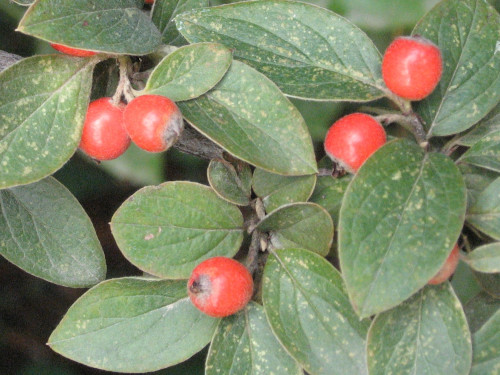 Scientists specifically identified Cotoneaster franchetii – a variant that is thicker and denser than average, with small hairs present on the leaves – was at least 20% more effective in absorbing vehicle emissions, compared to other shrub types tested, going as far as to dub it a “super-plant”.

Perhaps most fascinating, however, was the discovery Cotoneaster franchetii had very little on quieter, low-traffic streets with minimal pollution levels: amazingly, its efficiency actually increased in line with the levels of pollution nearby.

In other words, the research means this useful variant of shrub is perfect for targeted mitigation of roadside pollution, without visually blighting the landscape; rather improving it, as the shrub's flowers and berries are a keen draw for pollinators and small birds respectively.

Cotoneaster franchetii is a strong candidate when creating new buffer zones, but can equally be shuffled into gaps in existing shrubbed areas where individual plants may have died back over winter.

It can also be bought quite inexpensively and placed into gardens – for example in pots, or encouraged to climb a fence or trellis – so you too can benefit from its extraordinary pollution-eating abilities.

A Home For Everyone

Reward your senses in March

Plant of the Month